If you’re a recent homeowner looking to set up your kitchen arrangement or you’re tired of using a kettle and would like boiling water more readily available to you, there are plenty of reasons (and benefits) as to why you might like to add a boiling hot water tap to your household.

Though they are an investment, they’re worth every penny. Not only do they come in handy at tea-time when you’re cooking and need to fill a saucepan with water, but they’re also used for making tea and coffee.

A boiling water tap will provide you with boiling hot water in seconds, so you don’t have to wait for your kettle to boil every time you’d like a cup of joe.

However, even though they’re a fantastic way to make your kitchen more convenient, picking the right one for you and your home can be anything but easy.

With plenty of choice out there, it can be difficult to create a shortlist of favourites – which is exactly why we’ve made one for you!

In this article, we’re going to be helping you pick the right hot boiling water tap for you by talking you through our top five favourites.

At the end, you’ll find a buyer’s guide and an F.A.Q section to answer any questions that you may have.

In a hurry? This is our winner!

Multi-tasking, easy to set-up and modern, the QETTLE 4-IN-1 Instant Boiling Water Tap is our top pick.

Not only will you be able to make endless cups of tea and coffee in seconds, but you’ll also be able to fill up pans of water for noodles, rice and pasta, make stock for gravy and even degrease roasting trays. The possibilities are endless!

Here are some fantastic features that set this boiling water tap apart from the rest:

The QETTLE 4-in-1 Instant Boiling Water Tap reaches industry standards as it is able to provide boiling hot water at a temperature maximum of 100˚C which is not only impressive but extremely convenient as it means you’ll have boiling water at your disposal whenever you’d like! So, even if you sleep through your alarm, you can still quickly and effortlessly get your morning caffeine fix before running through the door – no kettle needed.

High-performing and powerful, it features a large capacity 4-litre boiler that is fully insulated and CE approved. It will slot itself neatly under your kitchen sink and will be able to provide you with up to 8 cups of boiling water in one go. How impressive is that?

As well as this, the QETTLE 4-in-1 boiling water tap is also completely cost-effective and will cost just 3p a day to run when left on standby. As for its performance, this boiling water tap contains an integrated water filter system that will work to minimise the growth of limescale, all the while protecting the tap’s boiler tank.

Plus, made with safety in mind, this boiling water tap comes with a clever safety clip, which, when used, makes it impossible for boiling water to be dispensed from the tap. For this reason, we think it’s a great choice for those who have children and want to ensure that they stay safe.

If you would like a tap that offers hot, cold and boiling water, the Bristan 3-in-1 Tap might very well be the perfect choice for you.

Not only does this come from a leading kitchen tap brand, but it also comes complete with you and your families safety in mind. The boiling water can only be activated when you press the push button and has been specifically designed to flow smoothly from the tap in order to reduce any chances of scalding or burning from occurring.

As well as this, its modern, swivel spout is insulated and will ensure that it remains cool to the touch when the boiling water option is activated, so you can be confident that your little one’s hands (as well as your own) will stay safe at all times.

Thanks to the 3-in-1 feature, there are 7 temperature settings to choose from that will allow you to make a piping hot cup of tea or coffee, fill up a pan ready to boil food or even sterilise your baby’s bottles.

If that hasn’t impressed you, the Bristan 3-in-1 Tap also features a clever space-saving design that ensures you will still have space in your kitchen cupboard for storing different kitchen essentials, as well as giving you the option of removing your kettle and freeing up some countertop space.

Another leader in the boiling water tap game is the Quooker Fusion Round Chrome Boiling Water Tap – and for good reason, too!

An ideal ‘all-rounder’ choice, this boiling water tap is able to dispense hot, cold and 100°C filtered boiling water from just one spout. We love this feature because not only does it save on space and free-up your kitchen counter from a kettle, it will also make your life a lot easier, especially if you run a busy household.

For example, with the boiling water option, you can quite easily prepare foods and make tea and coffee quickly, while the cold and hot water options allow you to use it as a traditional tap if you prefer.

Plus, to save water and energy, the Quooker Fusion Round Chrome Boiling Water Tap uniquely boils water in an air vacuum to ensure that no water is wasted and only the correct amount of water is dispensed, making it excellent value for money.

For safety, it is insulated to ensure that the spot is not too hot to the touch, while its double-push and turn handle is childproof, so it’s suitable to be used in a household with children. Additionally, a red light ring will come on when boiling water is being dispensed and also when the tank is heating up.

Ideal for replacing your existing mini-tap (or as a welcome addition to your kitchen collection) this tap from QETTLE is really useful for making piping hot cups of tea and coffee for yourself and friends, blanching vegetables at lunchtime and even for sterilising your baby’s bottles and making up their milk formula.

Just like the larger version, the 2-in-1 Instant Boiling Tap is completely safe to use. It comes with a reliable safety clip which, when used, will make it absolutely impossible for any boiling water to be dispensed. Even when the safety clip is removed, you will still have to firmly press down a button on the handle of the tap at the same time you turn the handle in order to allow the boiling water to be dispensed.

It is both cost and energy-efficient as it costs just 3 pence to run a day while on standby! As a comparison, a kettle costs around 2 pence every time it is boiled (and just think how many times you boil your kettle throughout the day!) Additionally, the Mini 2-in-1 Instant Boiling Water Tap will allow you to ditch your kettle for good and free up your countertop space for other appliances instead.

As well as this, its CE approved, 4 litre boiler tank will slot itself neatly under your kitchen sink without taking up too much space (so you’ll have enough room to fit in kitchen products alongside it). QETTLE has covered all bases! 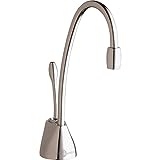 If you’re on the hunt for a tap that dispenses just hot, boiling water (rather than a 3-in-1 function) the Insinkerator GN1100 tap is a great option to consider as an alternative.

The GN1100 Tap features a sleek, space-saving design that will slot itself neatly into your existing kitchen sink arrangement while also leaving space under your sink for other appliances and kitchen essentials like cleaning products. You also have the option of getting rid of your kettle and freeing up your kitchen countertop.

To ensure that you and your family are safe, it has been designed with a safety release mechanism. This means that, when you take your hand off of the lever, the near-boiling water will shut-off automatically to ensure that no accidental scalding occurs.

Plus, not only is it energy efficient and economical, this tap from Insinkerator is able to produce the equivalent of 60 cups an hour of very hot water.

Boiling water taps are increasingly becoming a must-have for every kitchen and, after reading through our top five, we’re hoping that you can see why! However, if you’d like a little more information before purchasing a boiling water tap, here are some different criteria worth considering:

Though this is usually an additional advantage and by no means a requirement in a standard boiling water tap, it is definitely a feature that is worth considering. Not only does the addition of a filter system help to prolong the performance consistency of your boiling water tap, it will also help to reduce the chance of limescale forming if you live in a hard water area and keep unpleasant odours or tastes from forming in your drinking water.

In our opinion, this is one of the most important specifications that every boiling water tap should have. Luckily, many manufacturers have ensured that their boiling water taps are not only convenient and easy to use, but also completely safe to use, too.

Though the safety features will differ for each boiling tap, one of the most common types of safety precautions taken is by including a safety clip to prevent boiling water from being dispensed, or by requiring a specific lever to be pulled to activate the boiling water.

Another feature you might want to consider is the capacity of the tank. The size of the tank can vary from tap to tap, so it’s important to first decide how often you are going to be using it. If you plan on using your boiling hot water tap frequently, it might be worth going for a boiling water tap with a larger tank capacity. If you don’t plan on using it that often, though, a smaller one will suffice.

How hot is a boiling water tap?

How much does a boiling water tap cost?

How do I install an instant boiling water tap?

Unless you have experience of plumbing taps into a water supply or you or your partner is a tradesperson, we recommend getting professional help to install your brand new boiling water tap. Most boiling water taps will slot itself easily into an existing sink tap hole, with the tank fitting itself neatly underneath your sink, just like a traditional tap does.